Heather Heidelbaugh is a trailblazer who rose out of humble beginnings, worked her way through college and law school, and became one of the most respected litigators in Pennsylvania – leaving shards of the glass-ceiling far below her. Both her legal and political resumes stretch for pages, cataloguing courtroom accomplishments and service to her party and the citizens of Pennsylvania.

“The attorney general is the lawyer for the people,” she says of her decision to run. “The citizens of Pennsylvania need a real lawyer who understands the complexities of the law, the intersection between policy and law, and how the law impacts people’s lives.”

Heather resides in Mt. Lebanon, Allegheny County. She has served on the boards of Goodwill Industries, Carnegie Library, and as a Parish Council member of St. John Capistran Roman Catholic Church in the South Hills of Pittsburgh.

A gigantic Thank You to these special girls and their friends who put their support of President Trump into action and raised money at their refreshment stand for his reelection efforts. Their donation is a big boost as we work to turn out every possible vote for President Trump.

What about you?  We need volunteers today to make voter contact, register new voters, and work to ensure election integrity on Nov. 3.  Join us today. 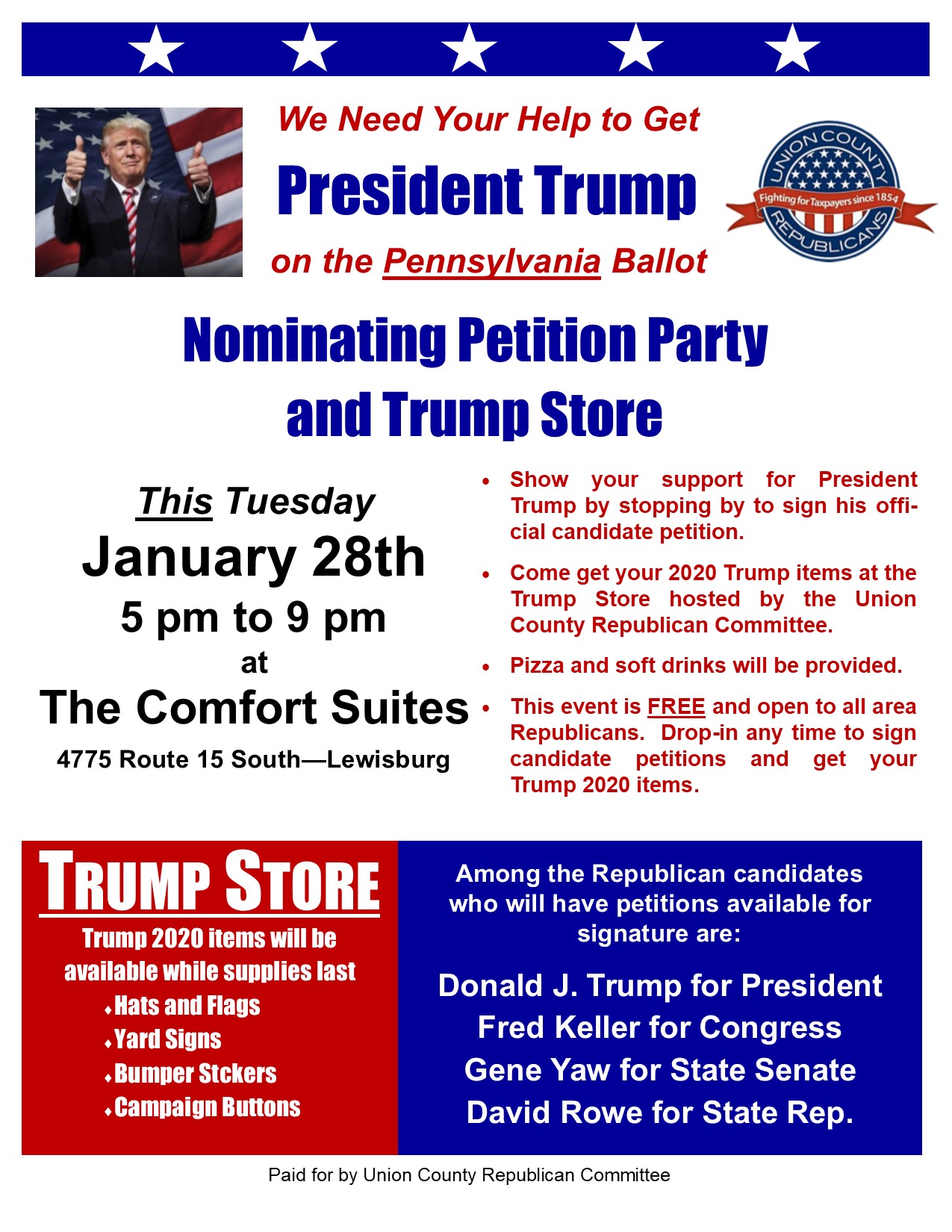 Republican representatives from Union and Snyder counties gathered at the Country Cupboard Best Western in Lewisburg to select a candidate.

“I am honored to be the Republican standard bearer in this important special election,” said Rowe. “I look forward to discussing our conservative, common sense message with the voters of Union and Snyder counties.”

Rowe continued, “I will fight for stronger economic growth and more family-sustaining jobs, lower taxes, a robust farming community, and less burdensome regulation on small businesses. I will stand up for our conservative values against the liberal Democrats who push for bigger, more intrusive, and more expensive government. I am Pro-Life, support the Second Amendment, and will work to protect religious liberty.”

“As a local business owner and employer, I know the business community is constantly challenged with ever increasing government regulations and taxes,” explained Rowe. “That’s why as an East Buffalo Township Supervisor I have never voted to raise taxes or expand government regulations. I am ready to take this same conservative, common sense approach to Harrisburg.”

For the past nine years, Rowe has been the owner and operator of LBG Fitness Inc. (CrossFit Lewisburg) and employs six local residents. Rowe is an active leader in the local community, serving as Vice-Chairman of the East Buffalo Township Board of Supervisors; Secretary of the Union County Republican Committee; a member of the Capital Campaign Council of Evangelical Community Hospital; a Director of the Central Susquehanna Fire and Emergency Services board; and a Commissioner of the Buffalo Valley Regional Police Department, among other leadership roles. Rowe is a member of the New Hope Lutheran Brethren Church in Lewisburg.

Site by Projects by Peggy, Inc.

Paid for by the Union County Republican Committee. Not authorized or paid for by any candidate or candidate committee.